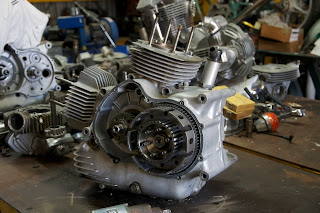 is all apart now. I snapped a few shots but to be honest i have never seen a motor be dismantled so quickly in my life. About an hour and a half from sitting in the frame to being completely apart. 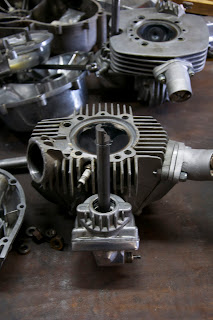 Im glad we did strip it….we found some pretty crazy things going on inside. Lots of repair work to various head sections and parts, like rocker arms etc. The head chambers have been completely altered and are now a massive size and in order to keep compression up huge domed pistons have been added which look like they have suffered a bit at some stage. Its easy to see why the extra plug was fitted to each head…..due to the size of the piston dome the combustion chamber was basically split in half…a plug located right at the top of the chamber would have been appropriate but as the standard position is on one side of the head in order to have proper ignition across the chamber another plug was fitted. This is going to make the bike somewhat cantankerous down low but obviously was successful at high rpm…..also, large valves have been fitted as you would expect….there is the thought that we could find another pair of desmo heads and do some less radical work but im not completely convinced….if by some chance someone wants to go racing and has a set of heads they would like to swap let me know…. 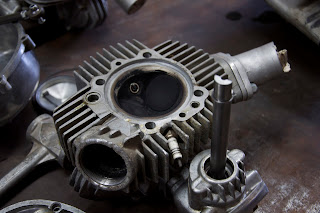 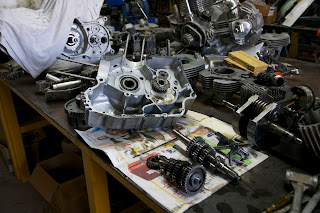 gearbox was in good condition and mated to a beautiful hand made straight cut gear drive and massive clutch. probably a bit of overkill in size but again….obviously worked well. 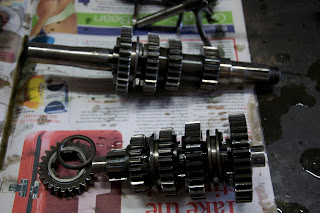 in a hundred pieces….all in all an exciting couple of hours, and a lot of fun watching ian explore a motor and someone else’s handiwork…I have to relay a funny story…In the photo below you can see ian’s totally charming daughter, im not sure of her age but she is probably about 7 or 8 or so. At one point there was some grunting going on whilst trying to free up the bottom end. In a very casual voice she asked her father, “dad, have you done this before?”…..in a quiet voice as always he said “yes angel, once or twice”….i chuckled to myself. 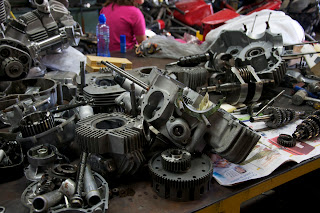